The question of whether to use voice coil actuators or solenoids for small displacement motion control applications comes up often.  This article explains the key differences between each product and why you might choose one over the other for your application.

A non-commutated DC linear actuator, typically referred to as a voice coil, is capable of a displacement in excess of 5 inches.  In addition, voice coil actuators, can move bi-directionally, and has a constant force over the stroke and can be used for closed loop position and force applications.

A solenoid can generate high forces at very short strokes, however it requires a spring return because they are operated unidirectional and the force output declines rapidly through the total displacement, and therefore are normally used only for short strokes, not typically longer than 0.5 in.  The typical application for a solenoid is the simple opening or closing of a switch or valve, and are not typically used for force or position control applications.

A voice coil generates a force based on an interaction of a current carrying conductor in a permanent magnetic field. 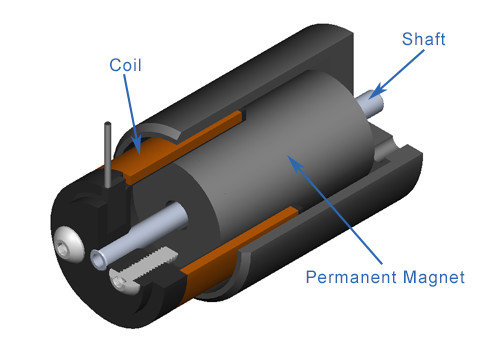 A solenoid generates force based on an electromagnetic field that is created by a current carrying conductor. 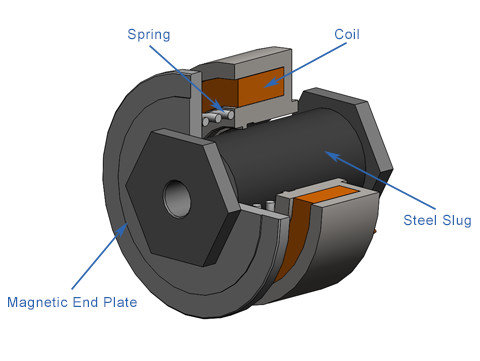 What is a Voice Coil Actuator?

The force generated is relatively constant throughout the stroke of the actuator, with minor dips at the beginning and end of the travel length.

What is a Solenoid?

Solenoids consist of a coil that is contained in a ferrous steel housing and a movable steel slug or washer.  An electromagnetic field is generated by current being applied to the coil.  The magnetic field intensity determines the amount of force that can be generated by the solenoid.  When the power is turned off, the force drops to zero and the spring returns it to its extended position.

The forces are initially high, but as the stroke increases the force decreases.

Solenoids are typically used to open latches or open or close valves, and are either used to apply a holding or latching force.

Should I select a Voice Coil Actuator or a Solenoid?

If your application simply requires opening or closing a valve a solenoid might be an option, however they have limitations when it comes to force linearity and stroke length.

Due to the fact that voice coil actuators typically cost more than an off-the-shelf solenoid, many customers try and use a solenoid when a voice coil actuator is the more appropriate solution.  Some applications require a constant force throughout the travel length, and in these situations a solenoid is insufficient due to the diminished force through the travel, while a voice coil actuator provides constant force.  This is particularly important in oscillatory systems.  Another advantage that the voice coil provides is force control, without a feedback device, because the force output (at any position in the stroke) is directly proportional to the current input.

This type of actuation lends itself to generally a higher force density, thus achieving higher strokes and forces in a smaller package size to the solenoid counterparts. 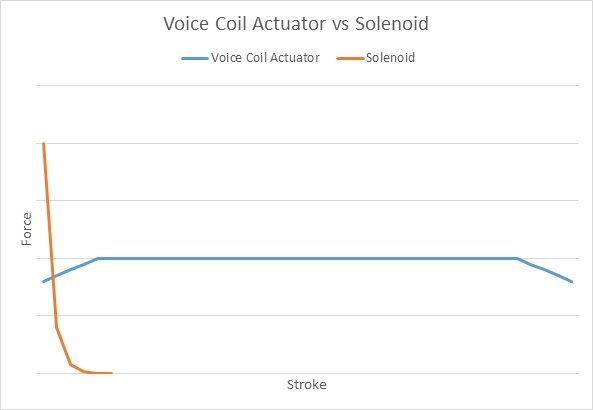