What is all the hype about the Hyperloop? How does it move? What is the technology that makes it possible? The answer: linear induction motors.

How Does a Linear Induction Motor Work?

Linear induction motor (LIM) theory is most easily understood as a rotary motor that has been cut and unrolled to generate linear motion, instead of rotary motion. It is comprised of two parts, the primary and secondary, which interact with one another only when power is applied. Either the primary or the secondary can be fixed while the other moves. 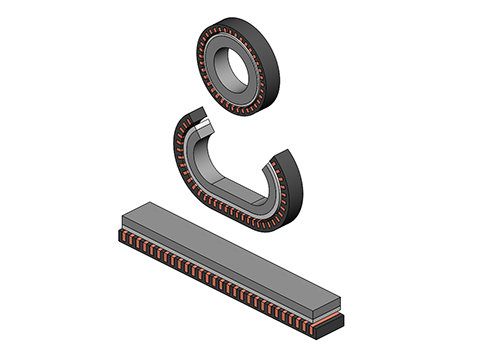 When three-phase AC power is applied to the primary, a travelling electromagnetic flux wave is induced and moves relative to the primary. The wave induces an electric current in the conductive reaction plate. The induced electric current interacts with the magnetic flux to produce a linear force. The speed of the motor can be varied by changing the input frequency using an adjustable frequency drive.

The primary consists of a three-phase coil assembly, equivalent to the stator of a rotary motor. The three-phase coils are wound and inserted into a steel lamination stack along with thermal protection components. The coil windings and stack are then encapsulated in a thermally conductive epoxy.

The secondary, known as a rotor in a traditional rotary induction motor, is a reaction plate. This plate can be comprised of aluminum or copper, and a steel backing. The reaction plate length is equal to the length of the coil plus the stroke. A bearing system is required to maintain the air gap between the primary and secondary.

Why Use a Linear Induction Motor?

Linear induction motors are ideal for applications that require rapid movement of large payloads. Linear induction motors can achieve speeds in excess of 1800 inches per second (45 m/s) and accelerations in the range of 3 to 4 g's. Standard LIMs can produce forces in the range of 720 lbs (3200 N) at a 3% duty cycle. Multiple motors can be used in conjunction with each other to generate larger forces.

Hyperloop is a high-speed transport system for passengers and goods, incorporating reduced pressure tubes, pressurized pods, linear induction motors, and air compressors. Linear induction motors are used to propel and decelerate the pods over the tracks and through the tubes. The LIMs are reversible so the same motor that propels the pod in one direction down the track can be used to propel the pod back to where it started. The pods could potentially "float" on an air bearing to eliminate friction.

Big Thunder Mountain Railroad is one of the first roller coasters to use linear induction motors to accelerate cars out of the station. This allows the cars to start moving at high speeds from a stationary state, without the typical hill-and-chain start. The LIMs are also used to park cars in storage.

California Screamin utilizes LIMs to launch the cars of the roller coaster. They are used again further into the ride to accelerate the cars as they travel over the hills.

The first section of Yas Island's Dawwama water coaster is powered by LIMS. At each of the hills, the linear induction motors launch the tubes through the uphill sections. This method of propulsion in water coasters is called hydromagnetic technology.

Thunder Rapids, to open in 2017, will be the first water coaster is the USA to utilize hydromagnetic technology. Linear induction motors are combined with turbine technology to keep the tube speeding along the slide and over the hills.